In its third year, we were proud to present the 2018 NZAG:

​In 2013 Gary became the first guitarist to be awarded a Fellowship of the Royal College of Music since John Williams (1983)  in recognition of his contribution to the instrument.
​ 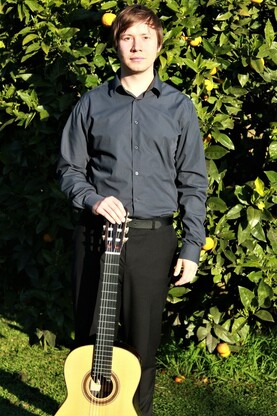 Cameron Sloan is a classical guitarist with a deep love of the instrument and its repertoire. He holds a Bachelor of Music with 1st Class Honours from Te Kōkī New Zealand School of Music, where he studied with Matthew Marshall and Dr. Jane Curry. He is currently working toward a Master of Music at the Melbourne Conservatorium of Music under the tutelage of ARIA award winning classical guitarist Tonié Field.

In addition to his solo playing, Cameron is a dedicated chamber musician. In 2015 he toured regional Victoria, Australia with the Melbourne Conservatorium of Music Guitar Quartet, with funding from Arts Victoria. He was a founding member of the New Zealand School of Music Guitar Quartet, has played in guitar duos with Jamie Garrick and Yunjia Liu, and has worked extensively with Wellington-based singer Griffin Nichol.
​
Cameron has taken masterclasses with some of the world's leading classical guitarist, including Alieksey Vianna, Ricardo Gallen, Xufei Yang and Miguel Trapaga.
To see who the NZAGs were in 2016 click here